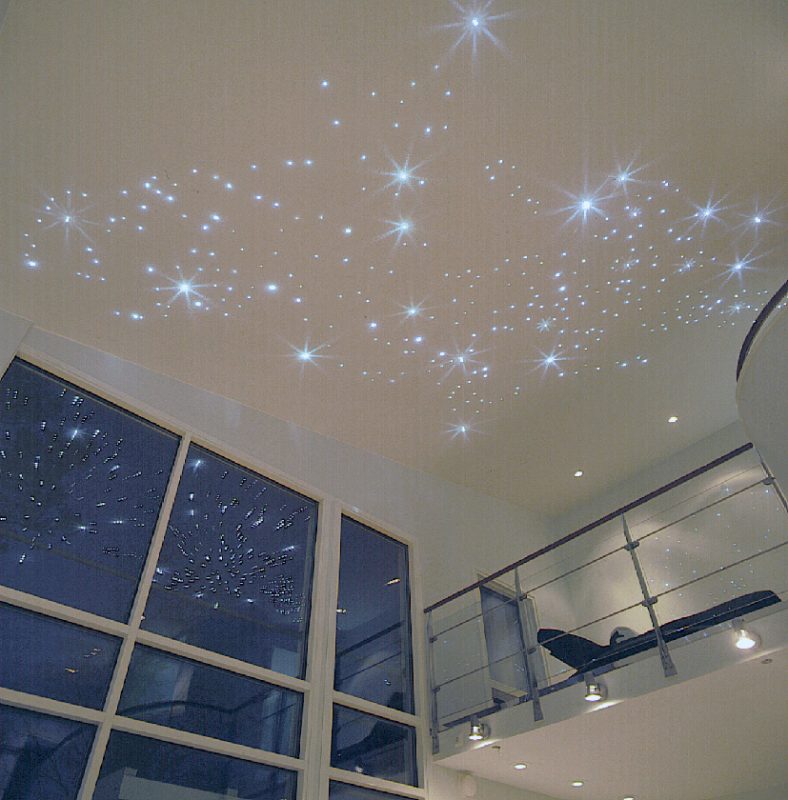 Cariitti’s Starlight Sky is a lighting solution above all others. It is an impressive creator of the atmosphere, imaginably installed in different types of spaces and surfaces, such as a covered outdoor terrace or bedroom ceiling. Starlight Sky based on fiber optic technology is usually installed on the ceiling, but there is nothing to prevent it from being utilized on wall or floor surfaces. This lighting solution, which mimics the brightness of the stars, is timeless as a fireplace fire that we never get tired of looking at.

Cariitti’s Starlight Sky product package consists of a fibre harness and projector and some packages also include crystals. The product has dimming option and with an additional dimmer you can select the desired brightness of light, which makes it easy to change the mood of the space. The product is available in both warm and cold color temperatures. At their simplest the stars shine evenly, and with an additional dimmer the stars shine in the selected brightness. But there are also various standard effects to choose for the projector. The so-called twinkle effect makes the stars to brighten and dim asymmetrically slowly back and forth, making the lighting more vivid. Twinkle effects are available not only in white light, but also in different shades of blue and in the combination of white and blue.

The installation of the Starlight Sky is carried out during the installation of boards or panels of the surfaces, such as the roof. Even before installing them, the desired number of small holes for fibres are drilled in the roof boards or panels. In the smallest sets, the roof surface needs 75 holes. The roof panels are then lifted up with a lifter. The fibres are pulled over the timber framing of the roof and then fitted through the drilled holes of the panels. After that the panels are fixed to the roof framing. When the roof panels are in place and the fibres are fitted in the holes, it is time to caulk the seams of the roof panels, paint the roof and cut the ends of the fibres to their final length. If you do not want to tamper with an existing roof surface, a separate ceiling board can be installed for the Starlight Sky.

This method is also suitable for the installation of the Starlight Sky in the hammam. But if there is access to the space above the dome of the hammam, then you can mount the fibers with help of two installers: one installer is in the dome space and puts each fiber down through a pre-drilled hole, and the other installer is inside the hammam and slightly pulls down these fibers. Then he fixes them in the holes, leaving some extra length, and finally cuts all fibers to their final length.

The number of fibers in the Starlight Sky is up to you, which makes the end result individual. The fitting of one fibre light to the roof panel through a pre-drilled hole creates a small star. If you wish to make larger stars, you can drill slightly larger holes for them, allowing to fit several fibres together. Stars of different sizes create a great entity. After all, real stars aren’t identical either.

Although installing the Starlight Sky requires some effort and care, it is not complicated at all. You should not be wary of getting started, because the end result is certainly rewarding. At Cariitti, we help you acquire the Starlight Sky, which suits your premises. Contact us and tell us about your wishes!